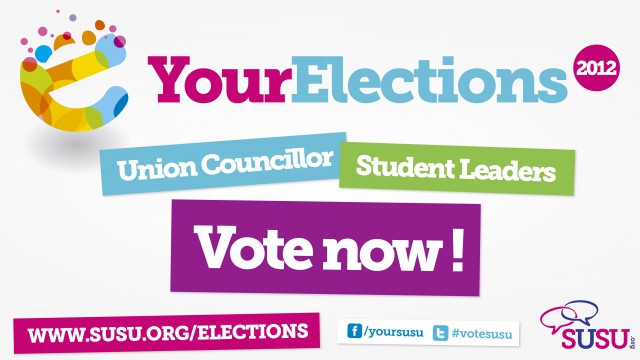 Voting is now OPEN in the Student Leader and Union Councillor Elections, and you can view the candidates and cast your vote online at www.susu.org/vote.

Student Leaders look after different areas within SUSU and represent the views of specific groups of students, like Postgraduate students, students based in Winchester or at other sites like the National Oceanography Centre and students within specific faculties. Voting on Student Leader positions is a great way to have a say on specific areas of SUSU and make sure your views are represented properly.

The other positions being voted on are Union Councillors, who help to make up the highest decision making body within the students’ union. One of the jobs of Union Council is to hold elected officers to account to make sure they’re achieving what they’re meant to. Union Councillor positions also represent specific groups of students, so make sure you have your say on who’s representing you.

You can find out more about the Autumn Elections, what these positions involve and how you could get involved at www.susu.org/elections.