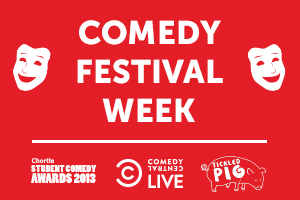 Sometimes you just need a laugh, and that’s why we’re bringing you Comedy Festival Week from Monday 11th until Thursday 14th March! Expect jokes a-plenty on our Facebook and Twitter, and three hilarious comedy events to get you grinning.

Monday 11th March – Chortle Student Comedy Award comes to Southampton!
The Southampton heats in this national competition are being held in The Bridge, and we’re hoping that we have the winner of the next Chortle Student Comedy Award! Your MC for the evening is Stephen Grant, and we’ve got lots to fit in so please arrive for 7pm.  Advance tickets are only £1 or are £2 on the door (what a bargain!) – get your tickets now from www.susu.org/boxoffice.

Tuesday 12th March – Comedy Central!
Our fortnightly comedy night in association with TV’s Comedy Central. This week’s headliner is Andrew Bird, with support from Ed Gamble and Chris Martin as your MC. Tickets are outstanding value at £4 and on sale from www.susu.org/boxoffice.

Thursday 14th March – Tickled Pig!
Tickled Pig is a comedy production company that produces comedy for nights in London and festivals across the UK. The company was founded on the back of it’s highly successful student comedy competition. This event will be the last Southampton Heat before the Southampton Final and is hosted with our friends in Comedy Soc. Find out more about the competition on the Tickled Pig website. Tickets are £4.