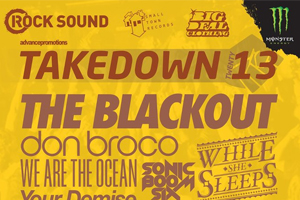 The largest alternative festival on the south coast is coming to the University of Southampton on Saturday 10th May.

Takedown is a one day festival bringing 5 stages of live music across SUSU, with headline acts that include The Blackout, While She Sleeps, Don Broco, We Are the Ocean, Mallory Knox, Sonic Boom Six and many more.

Tickets are on sale now if you want to start the summer festival line-up early, and can be bought online from our very own Box Office at www.susu.org/boxoffice.

Takedown is an all day event, which will mean that both SUSU buildings will be closed to non-ticket holders for the duration of Saturday.

However The Café will be open to students from 9am until 11am for their famous breakfasts and The Shop will be open and accessible throughout the day.