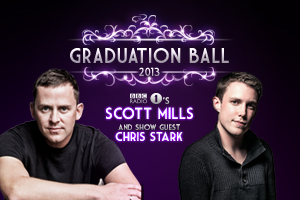 We are thrilled to be able to announce even more acts for this year’s Graduation Ball on Monday 10th June at Oceana in Southampton.

So far, we’ve given you details of the line-up for Oceana’s largest room – The Icehouse, which includes UK dance act Example + DJ Wire, Pendulum, vocalist Fleur, Varski and R3Wire.

We’ve added yet more names to the billing with BBC Radio1 favourites Scott Mills and his show guest and former University of Southampton student Chris Stark! The pair will appear in the New York Disco Room and will play through three years of Number 1s from your time at university.

Also on the line-up in the New York Disco, is former Britain’s Got Talent duo Stavros Flatley – who will be performing live to bring a bit of comedy to this year’s Ball.

We’re close to finalising the last of the acts for the Bar Quarter and will have news of the complete Graduation Ball 2013 line-up very soon.

Tickets for Graduation Ball are on sale now to all University of Southampton students, who can each buy up to four tickets, and are available online from www.susu.org/boxoffice or in person from The Box Office at Reception (Building 40).

You can also buy tickets for a special Graduation Ball Pre-Party in The Bridge, which includes a delicious three course meal, a glass of bubbly and free transport to Oceana for just £15.