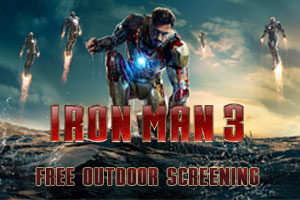 Hot on the heels of their incredible 3D films week, Union Films’ outdoor screen returns this weekend with a chance to see Robert Downey Jr take on the formidable Mandarin terrorist group in Iron Man 3 for free!

Once the sun has set, they’ll be showing the film, from 8:30, using their new digital projector and surround sound set up on the grass outside SUSU. Surge Radio will be there throughout the afternoon playing music while Union Films will be selling drinks and refreshments from their bar. There will even be a BBQ set up!

There’s no need to book a ticket, just head down to SUSU on Saturday, with a blanket to keep yourself warm, to join the action put on by Union Films!