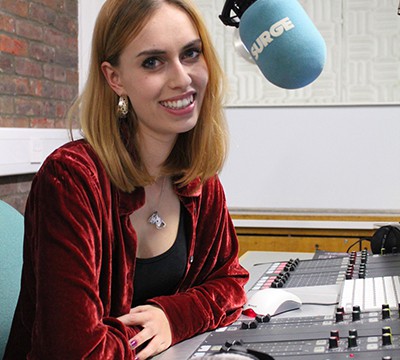 The 21-year-old from Reading  received the bronze Best Female Presenter award at the prestigious indigo2 at the O2 Arena, London.

Emma, who has just started the final year of her degree in English Literature at the University, is the Programme Controller for Southampton’s Surge Radio. Surge began life in 1976 as a ‘pirate station’ before being licensed in 1977. Over the last 10 years, the station has been short-listed 28 times for SRAs taking four gold, six silver and four bronze awards. Emma was proud to be the first Southampton student to be in the running for Best Female Presenter.

Supported by BBC Radio 1 and Global Radio the SRA’s recognise the diversity and quality of talent and content in student radio. The awards often serve as a springboard for the next generation of radio talent into the broadcasting industry. Chris Stark of BBC Radio 1 fame and Matt Treacy now a BBC reporter and producer are just two of the Surge alumni who Emma hopes to emulate.

Talking about her passion for radio, Emma said, “I would love to go into radio – that is the absolute dream – but it’s such a competitive industry to break into. I would also love to try TV but I’m not thinking about that at the moment because radio is what I love and where I have the most experience.

“My love of radio comes from my interest in entertaining and meeting new people,” she continues. “I love chatting to people and telling their stories because you can pick up on one tiny little conversation and turn that into a feature or a character you can work with that works very well on the air.”

At Surge Radio, Emma is in charge of programming and developing the technical and presentation skills of the student DJs. She also presents her own show and has been involved in a variety of on-air programmes including the station’s Official Chart Show, a satirical news show and fronting the student election night live broadcast for radio and students’ union television broadcast via SUSU.tv viewed by over 10,000 viewers. Emma has also recorded and directed a series of radio plays.

Her aim this year is to get as many new people involved and excited about Surge Radio as possible whilst maintaining a high level and standard of presenting and production.

“We’re also doing a number of new things this year on Surge including a breakfast show between 9.00 – 11.00 am,” Emma concludes. “Being involved in student radio is really great experience. Radio isn’t just about speaking and making sure that people at home are listening to you, it’s more about the reaction others have to what you’re saying so it’s really about teamwork and developing those people skills which is really important regardless of the career you choose after university.”