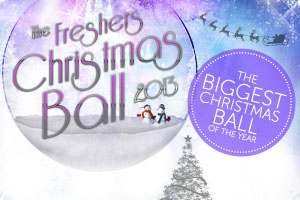 SUSU are pleased to announce a record amount of interest has been received for the Christmas Ball. The festive event is all set to be the biggest ball SUSU has done in years and the biggest event ever organised by the JCRs. Tickets went on sale on Monday 11th November at midday but an extra 500 had to be released on Friday 16th when the event approached capacity. By the next Monday 1400 tickets had been sold, just seven days after they went on sale.

Taking place on 7th December, the ball will feature a headline performance from Video DJ Cassette Boy (http://www.youtube.com/watch?v=Yxi6QDwQyLU) as well as a Santa’s Grotto, Silent Disco and lots more still to be announced.

“I am amazed at just how quickly the event sold out. It’s been a fantastic few weeks for the JCRs, first we managed to achieve the highest ever number of nominations for the JCR Elections, and now our largest ever Christmas Ball sold out in less than a week. It’s a fantastic response from this year’s Freshers, and shows just how hard the current crop of JCR committee members have worked. I can’t wait to carry this on into next year, with the new JCRs, but I’m confident in saying that we still have a few surprises left up our sleeves for this year!”