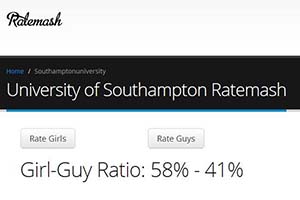 SUSU has recently been looking into a number of messages from concerned students about being featured on the ‘Ratemash’ website – http://tiny.cc/ratemash

For those who don’t know, RateMash is a website which allows users to rate other students at their University and ‘ranks’ them to create a leaderboard of the “hottest guys and girls” at each institution. To get the information, Ratemash asks users to sign up through Facebook allowing them access to their profile and to some information and photos from their friends’. Because of this, people who haven’t agreed to be on the site are getting featured without their permission.

It’s not uncommon for Facebook apps to use information about your friends when you log in to it through Facebook (e.g. Spotify recommending music they listen to), but we believe at SUSU having an app use pictures of you for rating feels a lot more personal and a lot more of a violation.

To tackle this SUSU are currently working with the Southampton University Communication team to put in a complaint to the Information Commissioner’s Office (ICO) requiring them to remove content relating to Southampton University students- The Information Commissioner’s Office (ICO) is the authority responsible to the government for enforcement of data protection and other information legislation.

On Facebook, search for ‘ratemash’, then click on ‘Report a Problem’  in the bottom right corner of the screen as seen below.

From the options which appear from the pop-up screen under the heading ‘Report to Facebook’, select ‘I’m reporting how this app is using my information’.

You may also contact the developer and select ‘I want to send my own message to the developer’ to express your dissatisfaction.