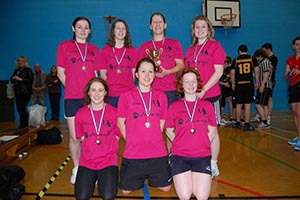 You may have noticed we have a selection of great trophies on display in the Concourse – but how much do you know about the people who have won them?

Each month we’re going to be interview a different winner to find out more about their team, why you might want to join them and how they got their prize.

Key achievements: Being one of oldest teams around, they’ve got a long list of achievements. The whole list is on the ‘Southampton University Dodgeball Club’ (SUDBC) facebook page, and includes a list of the boys’ achievements too.

Trophy-wise they’ve won the National Championships back in 2010, the 2012 East Midlands Open (with most of the current team), the 2012 University Championships, and the 2012 South Coast Open (on home turf!)

How do you prepare for competitions?

We  have training twice a week: 12.40-2pm Wednesday in the Squash Courts, and Saturday 9.30-11am in the Old Sports Hall. We make Saturday training compulsory the week before a tournament, and often leading up to it, and work hard on tactics, catching and teamwork.

Last minute preparations involve an early night and playing our favourite tunes in the minibus on the way!

What has been your biggest challenge?

The University Championships in 2012. It was the biggest women’s tournament to date, with 15 teams entering. It was also the highest standard of women’s dodgeball that I’ve ever seen- back in 2008 about five teams would enter, and everyone was still a novice.

We didn’t top our group in the preliminary stages, and therefore had to face a team who came first in their group in the quarter-finals. They were the team tipped to win, and we pulled out all the stops to win the best of 5- to everyone’s shock!

In the semi-finals we faced another seriously strong team who were expected to do well too- it was a really tough best of seven, going down to the last game where we won with some excellent catching from the girls!

In the finals, we had to face the team that beat us in the group stages, and it was an even closer game- again coming down to the last match, where we took home the gold!

We went there hoping to come back with gold, but when we realised who we were facing we though it might be impossible. But we played so well as a team, and all played the best we’ve ever played with such determination to win.

How did it feel when you won?

There was a lot of crying! We were so happy. It was the biggest achievement, and we’d worked so hard as a team for the whole year to get there and beaten so many strong teams to win. I couldn’t have been a prouder captain, and was so happy to do it with my close friends.

What would you say to anyone considering joining?

DO IT!! Dodgeball is the best fun you can have in three minutes! (One game is three minutes, but we play best of five against each team at tournaments.) You don’t have to be athletic or serious to play- it’s a sport that caters to everyone! It’s also ridiculously easy to excel at (many people have been selected to play for their country after only a year in the sport!), and so much fun.

SUDBC is such a friendly club, and so cheap to join- £15 for the year, or £10 for 2nd semester. Dodgeball is a new, upcoming sport and whilst we take it seriously at tournaments, training is a laugh and always good fun. Training is mixed, and everyone is welcome- it’s free to try out too.