More University Challenge as we get set for appearance number four! 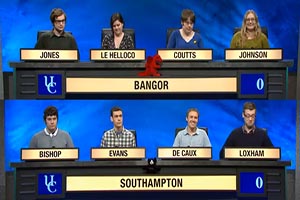 Fourth time on the show – is it any less scary now?

A bit, yes.  Certainly the first time watching ourselves, back in August, was very strange.  I hate it when I hear my own voice played back to me on answerphones, so I think for all of us, seeing ourselves on TV was weird – “Do I really look/sound like that?”.  We were worried about perhaps making fools of ourselves, but I hope that now that we’ve reached the quarter finals (and perhaps beyond), that won’t be an issue, although there’s still the potential to say something stupid!  And it’s still a little strange to hear Roger Tilling shout our names when we press the buzzer.  Overall though, we’re a bit calmer watching ourselves now.  The same was true when we were filming – we’d already been on set a couple of times, met Jeremy a few times (even had a beer with him!) and knew the studios, so it wasn’t too new.  On the other hand – quarter finals mean harder questions and more pressure!

Did you change your tactics?

I think our tactics were always just to answer as many questions as possible.  However, as I said above, we were calmer this time, so perhaps a bit less prone to jump in with silly answers.  Not that there won’t be any more silly answers…

Has life changed at all since appearing on the show?

Not at all.  We’ve met a few TV “personalities” from Eggheads and The Chase through taking part in quizzing tournaments as a team, but really it’s just the same as before.  You hear about the odd contestant getting attention on Twitter, but we’ve managed to avoid that so far – not sure whether we should be relieved or offended!

Have you been inspired to apply for any more shows?

We’re hoping to apply for Only Connect (now on BBC2), but I’m not sure there’s much else.  I think we’d all like to be on the other two top quiz programmes – The Chase and Pointless – but I’m not sure whether we’d manage to get on!  Otherwise our only chance is to become immensely famous in our chosen fields, and then get invited back to the Christmas specials in 30 years time…

What has been the biggest surprise of University Challenge?

I think seeing how the programme is filmed was a surprise – it’s hardly edited, and filmed in pretty much one take.  Also, not really a surprise, but Mr Paxman was very easy to get on with, maintaining his very dry humour but also being very personable and a thoroughly nice guy (perhaps unless you’re a politician!).  I also didn’t realise that Roger Tilling, who shouts people’s names when the press the buzzer, is actually in the studio, and does his thing live.  He’s also younger than I think we all thought he would be, and a top guy – strange that his voice is so familiar (he does lots of other voice-overs) but I doubt many people would recognise his face.

Were there any embarrassing moments this time around?

In the coming programme – perhaps a bit of banter with the host, but nothing too embarrassing I hope!  You never know though, because teams get a bit more comfortable with the whole TV thing, and you begin to see characters develop.  I think one of the strengths of the programme is that, because some teams are on repeatedly, the people watching at home remember certain contestants and become familiar with them.

We play Queen’s University Belfast on Monday.  If we lose, then we have to win our next two matches to reach the semi finals.  If we beat Queen’s, then we just have to win one more to go through.  Fingers crossed!

When can people see you on the show?
It’s on Monday 3rd February at 8pm on BBC2.  Or, if you miss it, it’s on iPlayer for another week after that, so you can laugh at the things we don’t know to your heart’s content!