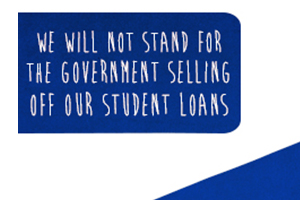 From the 3-7 February universities around the country will be taking part in a National Week of Action. Run by the Student Assembly Against Austerity, the week looks at the Government’s proposal to sell off the 1998-2012 Student Loan book to the private sector.

The Government has recently sold off the pre-1998 Student Loan book and have proposed the beginning of the 1998-2012 Student Loan Book sale to the private sector, valued at £10bn. This proposal includes plans to lift the low-interest cap that graduates currently pay, meaning these groups, amongst others, are at risk of paying more for a longer period of time. If followed through, the sale will affect a wide variety of students, past and present, and other young professionals currently working the United Kingdom and abroad.

As part of the week a group of University of Southampton students have formed a  #SoActWeek Team.  The team, made up of Ben Hansen Hicks, Kirstie Pullman, Claire Joines,  Lucy Upshall and  Cassie Robinson have organised a series of events for the week to encourage as many people as possible to take part in this national event.

The #SoActWeek Team  believe that this sale will ultimately short-change the treasury due to the loss of longer-term financial income from loan repayments.

“Our view is that the proposed sale of the 1998 – 2012 loan book is one that fails to make long-term economic sense for the Treasury. We believe that it is morally wrong to let a private company profit from a public debt.”

“Students should not be penalised for being proactive and investing in their future through Higher Education. The proposed sale would further impact already substantial tuition fees and resultant debt costs.”

NUS President Toni Pearce said “This announcement is extremely concerning and is one that will see the public subsidising a private company making a profit from public debt, which is incredibly problematic.”

The #SoActWeek Team are asking University of Southampton students to sign the petition online on the government’s website while our counterparts at other UK universities will be doing the same at bit.ly/SoActWeek. The team are also encouraging a conversation about the issue in the hopes of raising its profile at the University of Southampton with representatives on the University’s  Highfield campus, at Winchester, the National Oceanography Centre (NOC), and Wide Lane Sports Facility on Wednesday 5 February who will be available to chat to find out more about the proposal. These volunteers will also be encouraging students to sign the petition, as we feel it is something that will impact them.