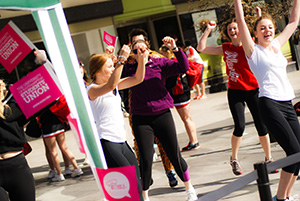 Families, schoolchildren, army troops and participants in fancy dress turned out to support the nationwide Sport Relief campaign which generates valuable funds to transform the lives of people living in Southampton and around the world.

As part of Southampton’s 50th anniversary city celebrations, the Cultural Quarter welcomed crowds to complete the 1, 3 or 6 mile course around the central parks and committed participants were rewarded with a special medal at the finish line.

This year, volunteer organisations from the city organised and funded the event including Southampton City Council and the Director of Public Health in Southampton, Southampton Solent University, Sport Solent, the Saints Foundation- oh and of course us!

Group warm up sessions prepared the crowd for the course and runners were treated to music from Batala Drums, DJs and cheerleading routines by the Solent Ravens and Liberty Pride squads as they completed their laps. Southampton Football Club mascot Sammy Saint also mingled with the crowd, cheering on the fundraisers.