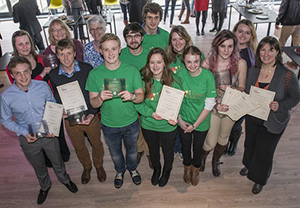 University of Southampton held the first Sustainability Action Awards last week, with staff and students being praised for their commitment to sustainable practices both within and outside of the institution.

More than 50 people attended the ceremony which took place on Wednesday 26 March to celebrate the initiatives being undertaken by both individuals and groups. Students’ Union President David Gilani and Chief Operating Officer Malcolm Ace were on hand to present the awards, with the event being led by the University’s Sustainability Champion, Pro Vice-Chancellor (Research) Professor Judith Petts CBE.

Oliver Robinson won the award for Outstanding Individual Student Contribution due to his work with a Hampshire-based Scout group. Last year, Robinson led 11, 14 to 18 year old Scouts to the Everest region of the Himalayas on a six-week expedition to Nepal. The Outstanding Individual Staff Contribution award was won by Dr Tony Curran who developed a game show to interactively educate students about responsible citizenship and the importance of reducing their carbon footprint.

Cameroon Catalyst, which aims to improve the provision of infrastructure in a village in eastern Cameroon took home the prize for Outstanding Performance by a Group of Students, having developed a medical centre, school buildings, and a sustainable electricity supply in the area in the past four years. Student volunteers who work on the project include Charlie Steer, Charlotte McCarthy, Ant Morris, Gervaise Turbervill, Katherine Morgan, Charlotte Youe, Emily Smith, Mikey Harper, Daniel Crisp and Matt Duckett.

The University’s Carbon Management fund, which aims to reduce the institution’s carbon emissions and make our campuses more sustainable, supported the event.