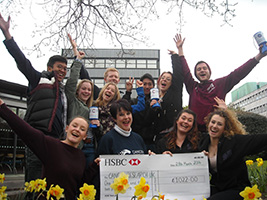 Students from the University of Southampton recently raised £1022 in donations for Cancer Research UK at Pure Dance 2014.

Sammi Gardiner, Pure Dance 2014 organiser, chose to collect money for the charity after receiving a nomination by Union President David Gilani to perform a Random Act of Kindness; an initiative launched by RAG in response to the Nek Nominate trend. Volunteers collected money at Turner Sims Concert Hall before and after each performance to support the worthy cause.

The five Pure Dance performances took place from 21st to 23rd of March, featuring 314 dancers from ten dance societies at the university: Ballet, Ballroom & Latin, Bellydance, Bhangra, Breakdance, Contemporary, Jazz, Salsa, Street and Tap. The performance showcased the talent of a range of students from novice to advanced groups. Each show consisted of more than 35 dances interspersed with video clips from the production of the show, and recent victories at national dance competitions.

Talking to the Wessex Scene on Friday when presenting a cheque to the charity, Gardiner was overwhelmed by the success of Pure Dance and the generosity of donators: “It went incredibly well, with all the money raised and with everyone generally enjoying it. We pretty much sold out on two of the five showings so it went very well. We were both so proud of ourselves for putting it on but also so impressed for those that actually donated this amount of money. We’re so happy with this result.”