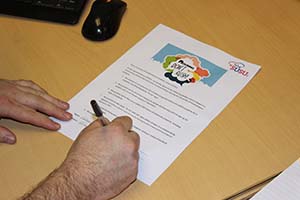 Following the ongoing “Vent About Your Rent” survey, devised by Union President David Gilani: for students to name-and-shame their lettings agency or landlord so as to identify Southampton’s 10 worst lettings agencies, the Union launched the infamous “Don’t Rush” campaign urging students not to hasten to sign housing contracts.

The campaign and survey were developed as a result of students decrying a range of issues with their student accommodation or landlord every year. So far, the survey and “Don’t Rush” campaign has reached over

60,000 students over social media, with media attention increasing since some local MPs and Councillors joined to support SUSU’s action against the lettings agencies. This year, Gilani has been working to remove lettings boards from outside student properties, claiming “they are eye-sores for local residents, have been linked to increases in crime, and pressurise students into rushing for housing”.

As a result of lobbying Landlords and Agencies to stop putting the signs up too early and removing them once the house had been signed, it was unanimously agreed by Southampton City Council that the letting boards should have stricter control as it  is “blighting neighbourhoods”, said Councillor Adrian Vinson.

If you have not already done so, please take a moment to fill out the “Vent About Your Rent” survey, found at: https://www.surveymonkey.com/s/XM67DFL