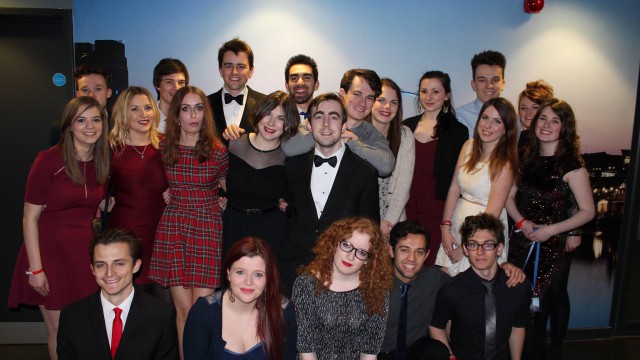 Student volunteers visited the Student Radio Conference in Newcastle from Monday 7 to Wednesday 9 April, attending sessions presented by radio professionals and meeting other student DJs from across the UK.

Several different events and sessions were held across the conference, but it was the I Love Student Radio Awards which saw University of Southampton’s student radio station receive praise. Former Station Manager and current Systems Manager Ben Morton was shortlisted for the award for Outstanding Contribution to Student Radio, while third year Geography student Will Morley, who is Surge’s Head of Show Development was shortlisted for Most Committed Committee Member. The nod follows the successful Surge Awards which took place in The Bridge last month to honour the talented volunteers within the station.

The awards also saw the South East win in the Best Region category, and witnessed second year English student Amelia Mayes shortlisted to be ‘the voice’ of the Student Radio Awards, which will take place in London in November.

Speaking about attending the conference, Deputy Station Manager Matt Wimsett said: “The conference was awesome. From a Surge point of view it was brilliant having so many of us attending the UK wide event, especially so many freshers! Everyone found it hugely useful and has come back exhausted but also with a million new ideas for Surge.

The station got some pretty high profile mentions throughout the three days, with the Head of Programming at Radio 1 praising one of our shows, our Surge Awards discussed by Scott Mills and Chris Stark and four of our DJs critiqued X Factor style during ‘Demo Factor’.”

Station Manager Jamie Barker added: “The Student Radio Conference was the best attended in recent memory, with over 20 members making the journey to Newcastle. It was an absolutely fantastic experience all-round, all of the breakout sessions have helped inspire our members look at how they can improve their radio abilities and hopefully crack the industry. It was great for Surge that this year our work with other student stations saw us rewarded with the Best Region award. As well as that it was a great community experience, even if travelling in a minibus for 7 hours isn’t going to be something we’d try again for a while.”

Surge Radio will hold its AGM to elect the 2014-15 committee on 8 May, with details available here.