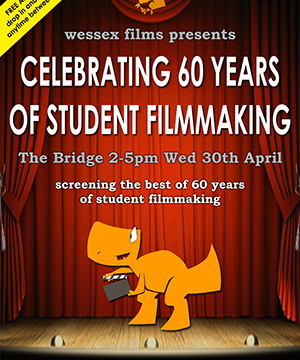 The University of Southampton’s award-winning filmmaking society, Wessex Films, humbly invite you to a celebration of filmmaking, culture and student history. On Wednesday 30 April between 2pm and 5pm the society will be hosting a special exhibition of films inside The Bridge Bar on Highfield Campus from all over the last six decades. Featuring narrative-based drama from auteurs in the making, and recovered documentaries offering an insight to what the university and student life was like during times gone by. There will be a wide range and variety of wonderful films to enjoy on show.

The event will be ran with FREE ADMISSION so feel free to drop in and drop out whenever you please. All are welcome to sit back and enjoy this very special exhibition.

The society’s first known work was a black and white 16mm film of the 1954 RAG procession. Starting the proud Wessex tradition of top-quality workmanship, the film was held together with rapidly-degrading sellotape. Despite the high chance of film disintegrating with every watch, Wessex Films filmed the next eleven years of RAG processions. In 1959, the first Wessex documentary ‘Welcome to Southampton’ was produced. This tongue-in-cheek introduction to life at university marked the start of a decade of varied and prolific filmmaking.

By 1962, completed projects included a promotional film for a sailing club, a Greek tragedy, a documentary about Connaught porters and an experimental drama labelled as ‘neurotica’, described as ‘students moping around water, with a calamitous ending or no ending at all’. A second camera and a black and white developing tank fuelled further films. 1965 saw an Arts Council grant funding a documentary about artist Allen Jones, which was still being sold by the Union ten years later. In 1968 Wessex organised the first National Student Film Festival, held at Southampton Union under the name MOTION ’68. 16 films from all over the country were shown, and a series of lectures and professional film screenings were held. By 1969, Wessex Films had a budget of £550, in a time when a house cost £3000, and later that year during the 1969 MOTION festival, Wessex Films won the awards ‘Best Documentary’ and ‘Best Drama’ for their endeavours.

The MOTION festivals continued until 1973, when they were moved to London. The ’70s saw a change in fortunes for the society, as the budget fell to just £75 by 1975. The last full-scale production was ‘Shotgun Wedding’, with a few attempts to restart the society and recapture the glory of the late ’60s. In the late ’70s, the production of ‘Planet Gong: Here and Now’ ran £900 over budget and morphed from a training film into a 30-minute giant.

In 1982 Wessex Films switched to the cheaper 8mm film format and the society resurged. Commissions for films came from groups such as the CND, Natwest Bank and the campus Morrismen. ‘Love on the Rails’ was even shown on BBC1 and received many awards.

By 1990 Wessex Films made the transition away from film to video. The society continued making films and recruiting members, but was a long way from the award-winning club of the ’80s. The most major production was a full-scale feature film in 1997 ‘Jester’. In 2000 seven films were screened at Harbour Lights cinema, to widespread critical acclaim. Over the next couple of decades, filmmaking fluxuated within the society, but yielded notorious classics such as the horror ‘Killer Noodle: Die, Sloan, Die!’ in the mid 2000s among others.

It was not until 2010 when the society was reformed and restarted again with the film ‘Chilli’, marking the beginning of a new era for Wessex Films and an eventual return to being an award-winning body of filmmakers. A tradition of producing horror films in October began, which would be screened during Union Films Halloween marathon all-nighter, and led to the creation of popular cult films such as ‘The Attack of the Giant Hamster’ and ‘The SUSU Massacre’. Though perhaps the society’s most infamous modern picture would remain the comedy ‘Doctor B’. In 2011, a joint production with SUSUtv ‘Flat 443’ won an award for national student television. Since then the society has been growing from strength to strength, providing a high standard of filmmaking tuition for its members and acquiring more state-of-the-art equipment, with big things on the horizon.

During the bulk of the academic year, Wessex Films meet every Wednesday in the Nuffield Theatre to provide friendly filmmaking workshops and plan exciting filmmaking sessions. Filmmaking is easy to pick up and there’s tonnes to get involved with, from writing, to acting, to directing, to camera work to editing, and everything else in between.