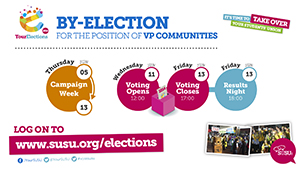 Following the recent news that Oli Coles will not be taking his second year in office as VP Student Communities next year, it has been announced that SUSU will be holding a by-election to fill his position in the coming weeks.

The role of VP Student Communities is key to the running of SUSU, reaching out to student groups such as International Students, Post-Grad Students and students at sites (i.e. Winchester School of Art and the NOC), as well as overseeing the running of JCRs and Diversity Groups. Over the past year, SUSU has worked on fixing fees for international students, extending shop opening hours to make life easier for postgrads, and passed several policies to make life better for international students in halls and trans* students.

The new VP Student Communities will work to continue all the progress made this year, as well as starting up new projects. Nominations are open to any student at SUSU and open at 12pm on Friday 30 May.

The timetable for the by-election will then run as follows:

Thursday 5 June, 10am – Nominations will close;

3pm – Briefing for all candidates;

Monday 9 June, 11am – Questions asked to candidates during Union Council.