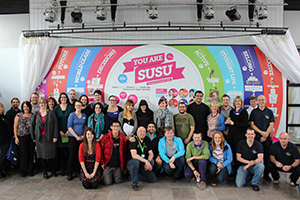 We are pleased to announce that we have just been presented with the Silver award from the business improvement programme Investors in People (IiP).

The programme aims to measure and improve working culture, employee engagement and effective leadership in an attempt to realise the potential of the people within the company and improve overall standards.

IiP assessor, Janet Duncan, said that it was the quality of relationships between staff, and the fun and vibrant atmosphere which gained the organisation the impressive award. The flexible work arrangements offered by SUSU were also praised for creating a friendly work environment.

The high levels of trust between staff and managers, and the autonomy which staff are given in their individual roles was also commended. Duncan said that following the assessment, which included a week of interviews,

she could confidently conclude that staff at all levels described SUSU as an organisation with a clear purpose and vision with strong leadership.

On gaining the accolade, Union President David Gilani said: “I’m absolutely delighted that SUSU has been awarded Investors in People: Silver – putting us up there with employers who have been reaching for this level

of external accreditation for decades. It’s fantastic that SUSU takes people development really seriously – both for our students and our staff. Next stop: Gold!”