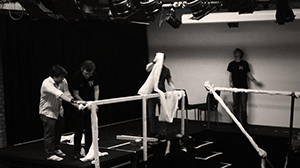 Although performing arts societies are rumoured to spark love and romance between its members, SUSU PA has begun a new love affair. Recently, the theatrical societies have been becoming more friendly and supportive of each other than ever. This can largely be accounted to the recent AGM results, in which Theatre Group’s Webmaster of 2013-2014, Robin Johnson, became Showstoppers’ President. Johnson spent his time on Theatre Group’s committee with Theatre Group’s then Secretary, and now President, Sally White. Members across both societies have lauded the close relationship the societies now share, with enthusiastic presidents who share a friendship.

It is important to note that performing arts societies have been encouraging and supporting each other for a long time. Most of the ticket sales for shows at the university, go to other performing arts members. LOp Soc, the light opera society, and third theatrical group, always turns out in force to see other society’s performances. It has now also become commonplace for the social secretaries of the three theatrical groups to create socials to see other groups’ shows.

What has been particularly refreshing to see, over the course of the year, is Stage Soc’s increasing compliments about working with shows. Without Stage Soc, it can be very challenging to make PA shows happen, and anything ambitious is out of the question. This was discovered quite quickly this year after Stage Soc cut back the number of shows it would support, to reduce the workload on members, whose working nights often ended as late as 4am. This has made many performing arts members significantly more grateful for the work Stage Soc does, and Stage Soc members have felt this change in attitude. Members have reported an increased willingness to lend a hand building and painting set, cast and crew bonding over the shared time. Coming up soon, as a testament to the societies’ bonding, is a Theatre Group, Showstoppers, LOp Soc, and Stage Soc joint social to Itchy Feet. We look forward to seeing the societies’ collaborations in the future.