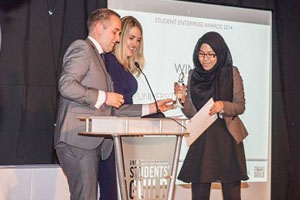 Awards earlier this month in a ceremony at the University of Exeter.

The non-profit student project SanEco which won the award, is working to enhance the lives of women and communities in

Kenya through the adoption of innovative sanitary solutions. Formed in late-2012, the project has already implemented

SanEco toilets which recycle human waste for use as affordable fertilisers. They have also provided SanEco sanitary towels and embarked on a marketing strategy to teach women about the importance of menstrual health and the use of

SanEco Project Leader Tiqa Adinin told University of Southampton that: “It was a great honour to have receivedthe award for SanEco despite the inspirational competition from other universities. It goes to show how much the SanEco team have dedicated with the help of the university and advisors we’ve had since the project started. With big plans ahead, we cannot wait to see where the project will go in the years to come.”

The SETsquared Partnership which held the awards is the social enterprise collaboration between the universities of Bath, Bristol, Exeter, Southampton and Surrey. In 2015, the prestigious ceremony will be held here in Southampton.

SanEco was nominated for the award in 2013, and won the Unilever ‘Made By You’ Award at the Enactus UK national competition in April this year. The award is another achievement for the hugely successful team at Enactus Southampton, working to run efficient social enterprise schemes. In October 2013, Enactus Southampton finished second at the Enactus World Cup in Cancun, Mexico, marking itself as one of the leading teams of student social entrepreneurs in the world.