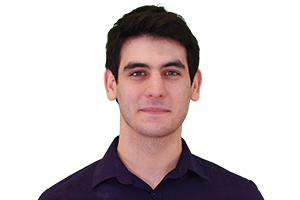 They’ve had three weeks to settle into their new roles within SUSU, so we thought it was about time that we got to know the sabbaticals who will be leading the Union for the next year. Over the next few weeks we will be talking to each sabbatical to find out a little bit more about who they are and what they’re hoping to achieve. First up is Union President, David Mendoza-Wolfson.

I once had a Japanese ‘build your own ice cream’ gummy and gel sweet. It was not good.

2. If you won the lottery what’s the first thing you would do?

I’d buy lots of chocolates and then invest it.

3. What was the first album you ever bought?

That sound when an F1 goes past.

5. What would be in your dream sandwich?

6. How different has your new role as President been compared to the VP Education position you held last year?

Completely different. It’s a totally different set of responsibilities, with a much greater emphasis on the Union.

7. What part of being President have you most enjoyed so far?

There’s too much to choose from! It’s been an absolute whirlwind 3 weeks!

8. If you had to choose your top priority for your planned work at SUSU over the next 12 months, what would it be?

Creating a greater sense of community at the University with a real focus on inclusion, enterprise and creating opportunities.

9. What’s the most important thing you have learned so far as President?

The things I’ve learnt about my team.

10. If you could pick anyone alive or dead to join the sabbatical team, who would you choose and what role would you create for them?

I think I’ll have to go for Cicero and give him the brief for communications.

Check back soon for another set of questions with one of the other new sabbaticals!