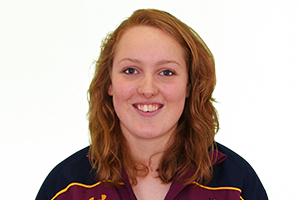 Now that we’ve put over half of the new sabbatical officers through their paces, it is VP Sports Development, Katie Lightowler’s turn. Flashing a whole swimming pool in Norwich? Ripping her salopettes down the crotch while skiing? The Union President’s distinct smell? It’s all here, so read on if you want to find out more.

1. Have you ever had any embarrassing sporting moments?

Too many to count! I will narrow it down to two particularly prominent ones. The first one, I was competing in Regional Swimming Championships in Norwich, swimming 100m freestyle. I was only 13 at the time and my dive wasn’t really perfected. I ended up entering the water at the wrong angle and the top half of my swimming costume, which was slightly too big, got caught and I flashed the entire pool. Extremely embarrassing for a 13 year old who was just beginning to develop! The second embarrassing situation was on a ski holiday. My brother and I are reasonably experienced skiers and were playing a game down an easy red run where you get into a tuck position and go through the others legs whilst skiing. I ended up ripping my salopettes right down the crotch during this process. I then had to ski the rest of the day with a very chilly bottom half! Never again!

2. Do you collect anything?

I collect a pack of picture playing cards for every country I go to. I will also collect them for different cities if I feel it’s worth it! At my home in North London there is an entire draw dedicated to playing cards! Slightly pointless I know, but it makes playing cards more interesting when you have a different country to look at every time you play!

3.  If you could be any fictional character who would you be?

4. What happened in the last dream you had?

This is really sad but I’m going to have to say it anyway as it is honestly the last dream I had… my last dream was about having internet in our new house…we are currently going on 4 weeks without internet because no internet company likes us. Tomorrow is the planned installation date. I am praying that the internet will be installed! Makes me slightly sad that I am clearly this dependent on an internet connection!

The Wolf of Wall Street

6. How’re you finding the job so far?

I could fill this question with tons of adjectives of how good it is but I am just going to say: it’s great! It’s hectic and challenging but at the same time very enjoyable. I’m really looking forward to the start of term when we’ll see our first BUCS games beginning and Intra-Mural kicking off for the first time being run by SUSU.

7. What will you be doing this year as VP Sports Development?

My biggest aim is around lifting sport on the University agenda. Currently, we have quite a fragmented system which doesn’t work in the best way that it could for most people involved in sport. In the next year I will be aiming for the establishment of a proper sports strategy which will then help to solve some of the biggest issues that our student groups and individuals face relating to sport. In addition to this however, there are ideas revolving around developing Team Southampton as a brand, making sure Intra-Mural is successful, making travel to our facilities easier, improving disability sport and finally connecting to our communities more – both local and alumni basis! Lots of exciting things to come!

8. What part of the year are you most looking forward to in your role?

Probably Varsity. I am in talks at the moment with the VP Sports from Portsmouth around the date. It looks like it has pretty much been set so watch this space for the release.

9. Who’s your favourite sports person and why?

Favourite famous sports person is probably Rebecca Adlington – I can relate to her quite a bit because of the fact I used to swim the same events she did. Also have big love for Mo Farah. He is the epitome of cool.

10. Lastly, if SUSU got invaded by giant cockroaches and you could only shut yourself in one room to save it from infestation, which room would you choose?

If the aim is for survival then definitely the Bridge (food, comfy sofas, big TVs, enough room to exercise, and alcohol); but if the aim is to preserve/save the room, then The Cube – it’s probably worth the most!