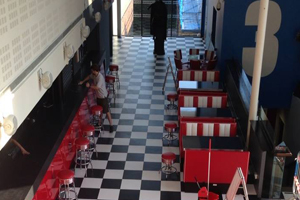 Renovations to the Bar Three area of the Students’ Union building are almost complete, ready for the wave of new students next month.

Bar Three has undergone a complete Hollywood-themed redesign, looking stylish with a black and white checkered floor as well as American diner-style seating, turning a thoroughfare into a destination space

Talking about the refurbishment, Union President David Mendoza-Wolfson said: “The refurbishment of Bar Three not only breathes new life into level Three but also allows us to increase the choice students have when looking for somewhere to eat and will include many healthy options that we will ensure are also great value for money. It will also help take pressure off our other very popular commercial services. The area is distinctive, unlike anywhere else on campus and is a fantastic social space.”

The continuous investment into spaces within SUSU will keep the building fresh and exciting for students while adding to the services which are already on offer. This latest stage of refurbishment will provide excellent value for money and introduce an expanded range of food options with healthier products and vegan alternatives.

As well as the retro furniture for visitors to the level three eateries, cinema-goers are also in for a treat. The entrance to Union Films has been refurbished and now features exciting ‘hero’-themed memorabilia from blockbuster films, including a Full Size Harvey SFX Model from the movie Sunshine.  An original piece from the movie, the figure cost £26k to make and was sold to the movie studio before being taken back on commission. Film fans will recognize it from the scene where the characters jump from ship to ship and the lead character Harvey blasts into space and freezes.

Other movie memorabilia on display includes:

The newly-renovated Bar Three area will be completed in time for Freshers’ Week 2014 in September, with an exclusive ticketed grand opening featuring live music, cocktail flaring and VIP guests – sure to be the show stopper of Freshers’ – More information coming soon!