A student guide to Southampton 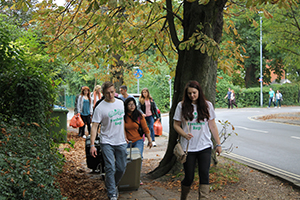 Whatever you’re into, there are loads of things to see and explore in Southampton.

Highfield Campus alone has the John Hansard Art Gallery, The Nuffield Theatre and Turner Sims Concert Hall, and those are just a few of the arts in Southampton. Our music scene is growing with venues including The Joiners, voted Britain’s Best Small Venue by NME in 2013. If musicals are your thing then the historic Mayflower Theatre regularly hosts prestigious touring shows and the nearby Southampton City Art Gallery also offers high-quality exhibitions.

On the subject of culture, we can’t go without mentioning our Winchester campus. This is the place to go for heritage. From the beautiful architecture of Winchester Cathedral to the Great Hall (the home of the Round Table of King Arthur) you’re never more than a stone’s throw away from another historical building. Some charge a few pounds to get in but they’re definitely worth seeing if you have the time to understand more about Hampshire’s history.

Winchester is also a great shopping and social spot, with more pubs per square mile than any other English city. But be wary, drink prices can be more expensive than the surrounding areas, but with some careful shopping around  you can find some more student friendly deals whilst you soak up the culture

Whether you’re a Saints supporter or not, St Mary’s Stadium is where footie fans can get their fix of the beautiful game, and The Stag’s Head pub on Highfield Campus shows plenty of sporting events on a large screen. For those who are keen to stay active then look no further than the Jubilee Sports Centre on Highfield campus.

For all your high street favourites and designer labels you can’t beat WestQuay. Located in the heart of the Southampton shopping centre it has more than 150 shops and almost as many restaurants- perfect for the much needed shopping refuelling! If names aren’t your thing and you’re looking for an alternative shopping experience then look no further than the Beatnik Emporium. A vintage clothing store on Above Bar Street, Southampton, opposite the cenotaph and a few doors up from The Art House, this is the place to go for quirky, eclectic clothing. And for when you’ve got a spare hour to fill in between lectures you can’t go wrong with Portswood Road. The clothes shops are okay with your staple New Look and the odd charity shop, but what it is famous for it is the Ice-cream Parlour Sprinkles – just ask any Southampton resident and you will their eyes light up (warning this isn’t a place to go if you’re on a diet!)

Rich with pubs, clubs and bars, you’ll never be stuck for somewhere to go in the evening. Just south of Highfield is Portswood, an area home to several student hangouts including The Hobbit, Jesters and Sobar, while inner city street Bedford Place features boutique venues and lively clubs like chilled out bar, Orange Rooms and electronic club, TRiPP. And at SUSU we’ve got our very own nightlife, with our infamous karaoke sessions at The Stag’s, comedy sessions and quiz nights at the Bridge, not to mention the tonnes of live music events we hold in our purpose built club throughout the year.