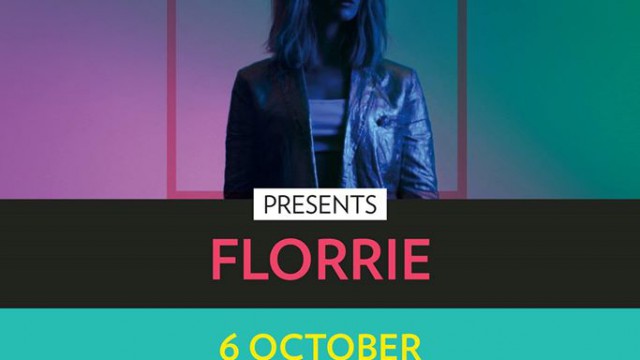 This Monday at 2pm will see the Coffee House Sessions present Florrie. Florrie is a singer, songwriter, drummer, multi-instrumentalist and producer.

From the age of 7, Florrie never thought much about anything else other than music once she had spotted a drum kit whilst on holiday with her parents. Following nearly a decade of constant practice, she had become hugely accomplished behind the drums.  Aged just 16, she left school and her home town of Bristol, England and headed to the bright lights of London intent on making it in the music business. She threw herself into playing as a session musician for several bands and, two years and a hundred plus gigs later, she found herself at Xenomania, the UK’s premier hit making production company.

Starting life at Xenomania as the in-house drummer, within months she had drummed on a number one record for UK girl group Girls Aloud as well as other hits for Pet Shop Boys and Kylie Minogue, to name but a few. Florrie’s talents for vocals, songwriting and arranging skills soon revealed themselves, and within a year she had switched from the girl drummer at the back of the band to the front woman she was destined to be.

Florrie’s first release was Call 911 on Kitsune in 2010. Since then, she has funded the past four years of her career through sync fees for her music, gigging and global song royalties from sales of her three self-released EPs. This has allowed her to slowly build and connect directly with her fanbase. Florrie has over 28,000 followers on Twitter, 25,000 YouTube subscribers and 62,000 likes on Facebook. She has charted on the iTunes chart in many countries – UK, America, France, Sapin and so on – with absolutely no promo.

Florrie has toured the UK twice as well as France and performed many other gigs all over the world – Shanghai, Paris, Madrid, Berlin, Barcelona, Dublin, Slovakia, Dubai, Oslo…

After all of this activity, Florrie decided the time was right to sign with a major label and in 2013 she signed to Sony. Florrie’s 2014 releases – ‘Sirens’ EP and ‘Little White Lies’ EP – have both had strong radio support from BBC Radio 1, including Huw Stephens, Zane Lowe, Phil and Alice, Jen and Ally.

A thoroughly modern recording artist, Florrie has epitomised the modern DIY approach to building a career in music – making her own way, drawing on considerable talent built up over many years, self determined, strong, gifted. Everyone should get ready for Florrie!

Find out more about Florrie at http://www.florrie.com/