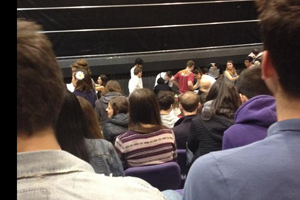 We’ve had the Hollywood Diner installed over the summer, and now we’ve stepped it up a notch. On Tuesday this week, SUSU played host to a huge casting session for a major Hollywood film (due to be filmed here in Southampton).

2020 Casting came to SUSU looking for up to a hundred extras for the upcoming flick – and they weren’t disappointed. Over 400 hopefuls turned up to the session at the Cube, and almost all of them were seen by the casting experts in the tight two-hour slot.

Rumours have been flying around about what the film might be, but 2020 were unable to confirm for sure what the major motion pictures is: they did, however, confirm that the film is “just about as big as they get.” Exciting! 2020 have been responsible for casting extras for countless major films in the past: names such as Harry Potter, The Dark Knight Returns and Star Wars were being thrown around and examples of projects they’ve previously been involved with.

Good luck to all those who went down to the Cube to give it a go – let us know if you went on our social our social media channels, and if you get called to be part of the filming – we’d love to hear your stories!