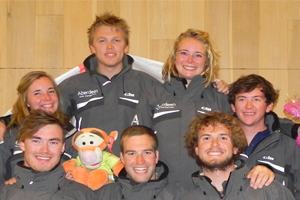 This is the first time that the University has ever won the World Cup.

They beat 11 other teams from the around the world across six days of racing at La Rochelle, France producing a fantastic performance by winning nine of the 16 races.

The team members were –

Conrad said: “It was an absolutely fantastic week, competing against top notch teams in beautiful weather. It still has not quite sunk in that we won!”

Conrad was interviewed on BBC Radio Solent about the team’s success. Listen to the interview here (it starts at 02:16:40): http://www.bbc.co.uk/programmes/p028cr78

To read all the updates from the week, please see https://www.facebook.com/ConradManningRacing