Get Involved: Humans of SUSU 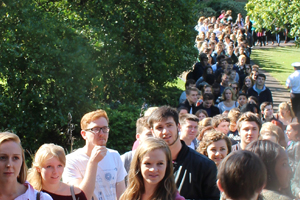 If you haven’t heard of popular blog Humans of New York, then where have you been? Started in 2010 by a photographer known as ‘Brandon’, the blog documents his mission to meet and photograph ten thousand New-Yorkers. Having now spread to Facebook and Tumblr (as well as a book release), Humans of New York consists of thousands of photographs of those who call the city home going about their daily lives, as well as a quote from the subjects of the photograph, taken from a short interview with Brandon. The project has allowed thousands of followers to open their eyes to those living in their area, as well as others from different parts of the world to gain an insight into the countless different lives lived in the city.

A new project we’ll be launching here at SUSU follows a similar mission with similar goals. Humans of SUSU is our attempt to get to know you better. We might not manage ten thousand, but we’ll do our best! Our photographers will be heading out onto campus to snap you, and get to know a little bit about who you are. You might be asked about your course, your halls or house, or any societies you’re involved with. It’s all about finding out more about the people who make up our Students’ Union, SUSU: you. (You’ll probably see SUSU the Cat pop up occasionally, although we’re not sure how great quotes from her will be…) All photos will be taken with your permission, and we’ll do our best not to stop you if you’re busy!

Photos will be posted on our social media channels, so to be the first to see the initial photos following the launch, make sure you’ve liked us on Facebook, followed us on Twitter  and joined us on Instagram.