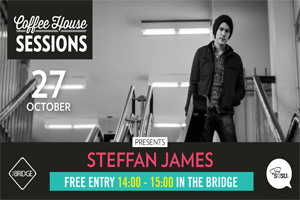 Our regular afternoon gig will return today with another top act from the Coffee House Sessions.

Steffan James, a South London-based singer songwriter, found his sound in the last few years travelling the USA. Heavily influenced by the blues and acoustic world of California he has toured the world as a guitarist, singer and songwriter for many an act. In late 2012 he started work on his own solo project.

The first two singles “Inside Out” and “She Knows” gained a lot of independent radio play in The States and across Europe and his debut album “The Truth” is available on iTunes.

“Steffan James, a singer songwriter with a great voice for blues and acoustic music” – Wild Acoustic.com

“Music that makes you feel something” – Best of British Unsigned