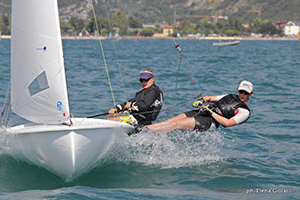 University of Southampton sailor Annabel Vose has become one of just three exceptional student athletes in the world to receive a scholarship from the International University Sport Federation (FISU), after an incredible year that saw her secure national and international titles.

Annabel, who is studying for a Master’s Degree in Ship Science, specialises in the 420 class and match racing discipline and has achieved success at university, national and international level over the last couple of years. She was part of the Southampton team that recently won the 2014 Student Yachting World Championship.

Reflecting on her incredible year and the scholarship, Annabel said: “To be recognised for all the hard work I have put into my sailing and my studies is brilliant. I had the best summer competing in some amazing venues and coming home with two World Championship titles really consolidated all the training I had fitted in through the year.”

Annabel went on to praise the support given to her by the University. She adds: “The link between education and sport is really key and the University has been wonderful in supporting me with both of these – being awarded the scholarship is testament to their support.”

Annabel has been sailing since the age of 7 and won her first national championship at 13. Since then she has gone on to compete consistently in a number of disciplines before choosing her specialist categories, where she has excelled. Her list of achievements is impressive and cites three World, one European and ten National Championship titles – including Gold at the 420 World and European Championships in 2012 and 2011 respectively.

Her nomination was submitted by British Universities and Colleges Sport (BUCS) and supported by the European University Sports Association (EUSA).

The other two recipients of the FISU Scholarship are Joshua Cheptegei, a cross-country runner from Uganda, and Natalie Good, a snowboarder from New Zealand.