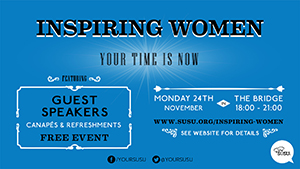 On Monday 24th November, The Bridge will host the 2014 Inspiring Women event. Come along for some engaging talks, Q&A, food and drink with some truly Inspiring Women who aim to encourage more women to get involved with elections and leadership roles. Last year’s event was fantastic, and this years is set to be too!  The event will start at 6pm and end at 9pm with a raffle. Students who sign up in advance on the SUSU website will be eligible for a free glass of wine or bottle of beer at the event.

The line-up of guests includes Josephine Knowles, from the Beyond The Streets charity and recent Masters graduate in Woman and Child Abuse; Zoë Hart, Head of People Development at SUSU; Kamaljit Kerridge-Poonia, first female in her family to go on to further education and current Head of Equality & Diversity at the University of Southampton; and Karen Lloyd, Training Manager at SUSU and judge at national events including the 2013 Women in Sales awards.

These women represent a range of different jobs and backgrounds, and have all succeeded in environments typically dominated by men. During the event, Kamaljit Kerridge-Poonia, Josephine Knowles, Zoë Hart, and Karen Lloyd will speak about their experiences, followed by a Q&A session with all the speakers answering questions from the audience.

More about our inspiring women…

Beckie, is your Vice President for Welfare 2013/14. She is here to make sure that you are healthy, safe and happy during your time at Southampton. She loves interior design, painting and baking tasty treats.

Josephine Knowles from anti Sexual exploitation charity, Beyond the Streets, has worked for many years in the area of Violence against Women. With experience as a volunteer, practitioner, trainer, consultant and student, the majority of her work has been working alongside women who have been sexually exploited. Most recently Josephine completed a Masters in ‘Woman and Child Abuse’.

Zoë has lived in a tent with Sean Penn, been a BBC newsreader and in a previous incarnation nearly trained to be a vicar. She is currently Head of People Development at SUSU where she takes the lead on issues of Equality and Diversity. She was a very ‘bossy’ child and when she was five declared that she wanted to be Prime Minister. She has since spent most of her twenties in a slight fog of trying to win the approval of middle aged men and desperately trying to reclaim her identity and her last name. She is now loving her 30s and is finally comfortable in her own skin…ish!

Kamaljit was born in India but has lived in the UK since the age of five. She was the first female in her family, including extended family to go on to further education and indeed get educated away from home, a big deal in the early days of migration, and perhaps still is for many women. Since this time she has challenged many stereotypes of women both in her own community and wider society. She has been drawn to equality and diversity work as it reflects her personal values of freedom, individuality and equality. She has worked in many sectors including local government, the civil service and now further education.

Some say she’s as mad as a box of frogs, but definitely maybe has a kinda life plan and strong values that underpin all that she does. Once caused a bomb scare with a Roland the Rat lunchbox. Loves learning, laughing and laughing whilst learning. Networking and knowing someone that can is what she does well. Connect people is what she loves. Thrived in the corporate world for too many years and now is confident enough to start peeking into exploring a portfolio career.  Has been a judge at way too many national awards including the 2013 UK Women in Sales award.