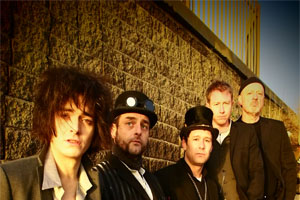 After a week’s break this Monday will see the return of the Coffee House Sessions to the Bridge at SUSU.  Kicking off at 2pm this week’s performances come from The Jar Family.

Hailing from Hartlepool, The Jar Family is an eclectic mix of musical styles and charismatic personalities. Taking their name from the donations jar they passed around at early gigs, the band are a tight knit group built on a foundation of singer/songwriters, who had the foresight to realise they were stronger collectively than they were individually.

With few musical opportunities and even less resources at their disposal in their native North East, the band temporarily moved away from their families and relocated to a deserted farm in the remote Cambridgeshire countryside. There they built themselves a rehearsal studio, lived in a ramshackle collection of old caravans, and started to develop and refine what was to become the Jar Family sound!

A relentless touring schedule has seen the band appearing as special guests to a number of established artists such as Jake Bugg, Babyshambles and Alabama 3. The Jar Family have brought their raucous and engaging shows to all corners of the country, picking up an ever-growing army of admirers throughout the UK!

In the summer of 2014, The Jar Family recorded new material at the legendary Monnow Valley Studios with producer Rupert Christie, and are planning to release a new album in 2015 amidst more inexorable touring.

If you fancy a sneak preview for Monday, here are a couple of their pre-tour videos –

Your Lips Are Movin’

More about the Coffee House Sessions

Launching in September 2013 and curated by Huw Stephens from Radio 1, Coffee House Sessions is an unprecedented new music initiative, exposing the hottest in upcoming UK music talent to the student market via daytime performances in University coffee shops around the country: http://youtu.be/CZRp_MoTqhM

With a carefully designed touring circuit taking in 40 universities, Coffee House Sessions holds acoustic performances at two different campuses a day over a ten day period and provides promotion for the showcased artists through  student media outlets such as student newspapers, student radio and student TV at each university.

To keep up to date with all the latest touring acts and download exciting new material you can now visit their website at coffeehousesessions.com