SUSU gets the Hollywood treatment 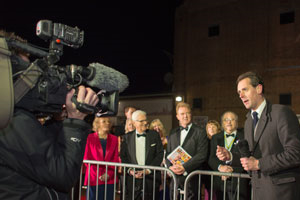 Monday 23 February saw SUSU join together with a range of local businesses, civic and community leaders from across Wessex to present a Rotary Red Carpet Gala Screening of Fox Searchlight Pictures’ film The Second Best Exotic Marigold Hotel (Ahead of its UK release on Thursday 26th February)

The event also launched the new Damaris Silver Screen initiative, and all the money raised from ticket sales will be used to take lonely older people to see this film in the cinema.

“The Rotary Red Carpet Gala screening of The Second Best Exotic Marigold Hotel was a fantastic event to be able to host here at The Students’ Union. Working with organisations such charities as Damaris, Rotary International, and many more of the community partners meant that the event was a truly collaborative effort. As well as this the support from 20th Century Fox Searchlight and the BBFC gave this event the high profile sparkle it required. The Union Films volunteers worked incredibly hard to make the night a success and all the staff involved helped make a great idea a reality. I sincerely hope that as a result of our event we get to see lots of isolated elderly people going out to see the movie and the use cinema as a way of reengaging with society and to make friends.”

Rotary International in Great Britain & Ireland is a volunteer organisation where members use their skills and their time to improve the lives of others while having great fun in the process. There are nearly 1,800 Rotary clubs across Great Britain and Ireland and 51,000 members. Rotary is open to anyone aged 18 and upwards. All that is required is a positive attitude and a sense of adventure. Rotary International was founded in 1905 in Chicago and is now the world’s largest international service organisation with 1.2 million professional men and women as members. There are 33,000 clubs in 200 countries and geographical areas. To find out more, visit www.rotarygbi.org.

SUSU in the news!

Check out what the local media have had to say about the event here: