Spotify’s Sound Clash is back for UK Students 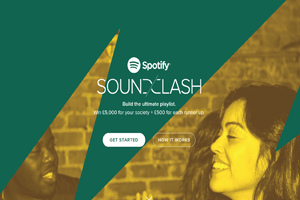 Spotify is once again giving university clubs and societies across the UK the opportunity to win a cash prize for their society with the return of Spotify’s Sound Clash campaign.

The Sound Clash gives university clubs and societies the chance to win a £5000 cash prize for their society – with another ten £500 runners up prizes – simply by creating a killer 30-track playlist on Spotify. The playlist should define their society’s or club’s sound, and then be shared among the club mates and throughout the students’ entire network on- and off- campus with their clubs, with the club with the most ‘playlist followers’ in the UK taking the first prize. The societies must use the cash to benefit the whole society or – if they prefer – they can donate it to a charity of their choice.

The Spotify Sound Clash was first created in the UK in 2014. With 400 society entrants and  +28,000 playlist followers in total, and club rivalries peaking across social media, the competition came down to a final two-horse race between Cardiff University Rowing Club and Oxford Brookes University Boat Club.

Both teams cruised past the 5000 playlist followers mark and the competition went right down to the wire until Oxford Brookes University Boat Club (OBUBC) edged ahead to more than 5600 followers to secure their win. Not only did OBUBC gain the most followers, their playlist was listened to more than 45,000 times during the campaign period. OBUBC used their prize winnings to purchase a brand new boat for the club and were thrown the ultimate Spotify winners party for the 200 club members and their friends.

In 2014 the Sound Clash was replicated across the US and German student communities and has now returned to the UK for the second time this February on an even bigger scale. The competition closes on March 27th 2015.