Who wants to party with Common People like you? 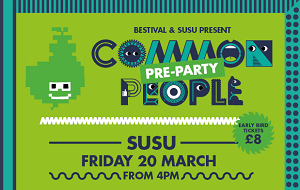 SUSU are proud to be hosting the Pre Party for the biggest Festival hitting the South Coast this year! Early Bird tickets are priced at only £8 for 12 hours of top notch entertainment, food on the course, BINGO and so much more!

Get your tickets Here as they’re selling out fast! Mark the date in your diary – Friday 20th March!