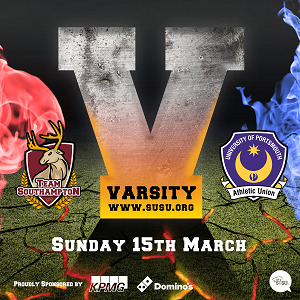 In counting down to the big Sunday showdown, the Southampton Varisty Twitter team had to jump the gun slightly as news of Portsmouth defeats, thanks to our eager surfers and equestrians, started coming in!

It’s nice to see our teams picking up where the 2014 bunch left off and made all the more sweeter for being away from home this time round.

We’re eager to see what #2DaysToGo has in store for us but let’s face it, we know that #TeamSoton are going to give it everything they have over the next few days so let us all join in supporting them this weekend!

If you wish to show your support in person then please use the Box Office to secure your ticket!

#3DaysToGo and another #Varsity2015 win for #TeamSoton. Equestrian won with 130 penalties compared to Portsmouth's 212!

#4DaysToGo So, here is where we will hopefully be celebrating on Sunday night… #cheese pic.twitter.com/xhSzOeYhLy