If you could change one thing, what would it be? 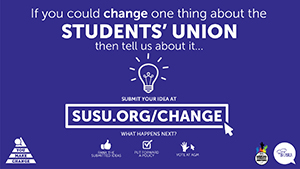 If you could change one thing – about the Students’ Union, University, or even the world – what would it be?

As part of the this year’s Annual General Meeting at the Union, we’re asking every student to suggest one thing they’d like to change  and can submit as many ideas as you wish!

It could be big or small – more water fountains in the library, or campaigning for a better system for student loans.

You can submit your idea online now at www.susu.org/change, or at one of the suggestion boxes we’ve set up around the Union this week.

As well as the AGM, we’ve also got hundreds of part-time positions available in the Summer Elections. Everything from Course Reps to Student Trustees are included – so if you’ve been thinking about getting involved, now is a great opportunity to start.

There’s one Academic President for every Academic Unit (and in  Social Sciences, there’s a Vice-President for each department). You’ll co-ordinate the Course Reps in your area, and will be trained to co-chair Staff Student Liaison Committees.

There’s over 20 positions available on our Campaign Committees, which fight for Equality and Diversity, make sure Ethical and Environmental issues are at the heart of everything we do, and work to improve our Wellbeing.

Our Student Leaders are senior part-time officers who lead on various areas of the Union’s work. We’ve got everything from International Students’ Officer to Charities & Communities Officer.

There’s 17 places available for Union Councillors, who sit as voting members of Union Council, the body which meets six times a year and decides what we get up to and holds us to account. If you’re interested in what the Union does but aren’t sure how to get more involved, this is the best place to start.

Student Trustees sit on the Union’s Trustee Board, a body which oversees out work and makes sure we’re spending our money sensibly and staying within the law.

Find out more about these positions at www.susu.org/change.

The Annual General Meeting of the University of Southampton Students’ Union will be taking place in The Bridge, Building 42 at 12pm on Wednesday 13th May 2015. This meeting will, amongst other things, be discussing all of the Proposals submitted by students. Although you are welcome to attend the meeting in person, the easiest way to vote on all the Proposals is online. You can find out more information about this meeting, including the formal notice, online at www.susu.org/change.

You’ve got until April 27th to send in your idea – do it now at www.susu.org/change.