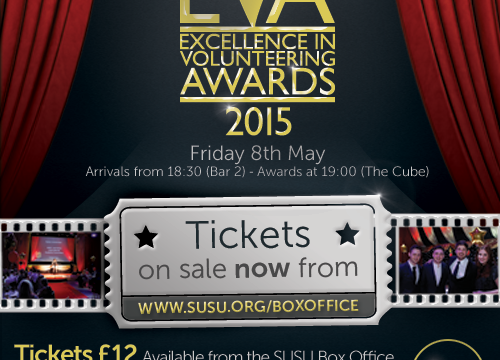 We don’t mean to brag, but members of SUSU are amazing volunteers. Alongside their degrees then run JCRS, coach sports teams, raise money for charity and so much more. There’s no way to summarise the incredible work members of SUSU do, but we do have one evening a year where we celebrate the hours of work put in.

The Excellence in Volunteering Awards, or EVAs, will return to The Cube on 8 May. This year there were over 286 nominations sent in, and we’ve now revealed this year’s shortlist. To see if any of your friends have been shortlisted follow this link:
http://www.susu.org/about/union-awards/2014/eva/shortlist

The EVAs will take place on the 8 June from 18:30 in The Cube, Highfield Campus. Tickets are available now from the SUSU box office.