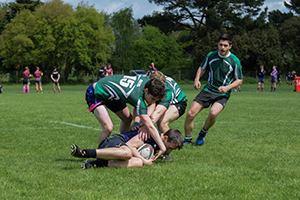 Wednesday 6 May saw SUSU celebrate the end of the inaugural Intra- Mural season with a glamorous Awards Evening. Taking place in the Cube at SUSU, awards were presented for the winners of every league with the highlight of the evening being a keynote speech from GB Rowing World Champion Dan Richie.

The Intra-Mural Programme is an Intra-University sports competition (sport between Halls, Faculties and Societies), for sports that are high in participation. This could be anything from Rugby to Football to Badminton.  Intra-Mural allows students to continue playing and developing their sporting skills, and with over 1,500 students who participate in the Intra-Mural programme, the Union facilitates a more casual and participatory element to sport. The programme is student-led by the Intra-Mural Committee, comprised of Officer roles and reps who represent teams from their own sport.

Awards on the night included:

This summer also saw SUSU hold their first ever Summer Tournament. The event was a huge success, with over 1,000 participants playing in eight sports.  SUSU offered Rugby 7’s, Touch Rugby, Rounders, Ultimate Frisbee, Football 6-a-side, Football 11-a-side, Hockey, and Mixed Netball. Teams were made up of Athletic Union teams, Intra-Mural teams, and students that had never been previously involved in sport at the University, making it a great event.