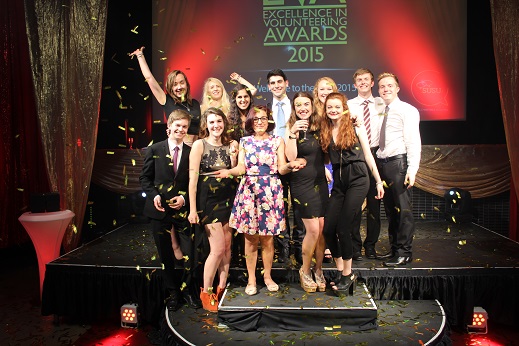 How time has flown! We’ve nearly reached the end of another action-packed year at SUSU, and what better time to celebrate the inspirational volunteering efforts made by the societies and individuals that make SUSU what it is today than the Excellence in Volunteering Awards 2015 (EVAs). The seven award categories, which relate to the values of SUSU, are designed to represent and recognise the many varieties of volunteering that take place within the Students’ Union. The categories are as follows: Collaboration, Impact, Engagement, Innovation, Commitment, Leadership and The Volunteer Award – for outstanding individuals who have shown many of the above personality traits, as well as enthusiasm and great personal drive. Last month, students were invited to nominate both societies and particular individuals, which were then whittled down into a shortlist. The awards ceremony was hosted by Amelia Mayes (Surge) in the Cube on Friday 8 May. The awards were presented to the winners and two runners-up by the Sabbatical Officers. The award-winners and commendations for each category are as follows:

A huge congratulations goes to all the award-winners and nominees for their hard work and dedication to SUSU this year!