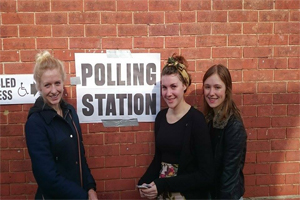 We had an amazing response to our #YourVoteYourVoice last week – hundreds of you turned up to the debates over 1000 watched online as well as soldiering through the all-nighter in the Bridge as the results were announced last Thursday.
Whether you voted in Southampton or not, here’s a rundown of how the results turned out.

Turnout for the Itchen constituency was at 62% – that’s over 44,000 votes cast – with Royston Smith (Conservatives) elected as the MP for the area, with over 18,000 votes. Rowenna Davis (Labour) came a close second with over 16,000 votes.

Over 43,000 votes were cast in the Southampton Test constituency, with a turnout also of 62%. Elected as MP was Alan Whitehead (Labour) with over 18,000 votes again, and was followed by Jeremy Moulton (Conservatives), who received just over 14,000 votes.

Turnout for the Romsey and Southampton North constituency was at a high, with 73% of the area turning up to cast their vote – that’s over 48,000. Elected as MP for the area was Caroline Nokes

(Conservative) with over 26,000 votes (following behind on a much lesser) 8,000+ votes was Ben Nicholls (Liberal Democrats).
We’re sure you’ve seen the results of the general election – but if not:

The Conservative party achieved a majority, securing 331 seats with over 11 million votes – the Labour party came behind with 232 seats, and over 9 million votes.

On a more local note Southampton stands under Labour control.