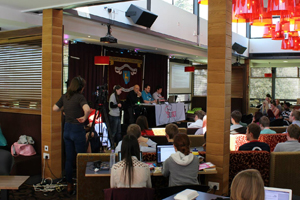 Wednesday 13 May saw one of the biggest events in the Democracy calendar – the SUSU AGM. This annual meeting includes an open council, in which any student can put forward a motion to be discussed, and any student can attend to vote on those motions.

This year, technology was on our side – motions were proposed online, as in previous years, and could also be voted on by proxy, allowing those busy with revision to cast their vote without leaving the comfort of the library.

Here’s a round up of how the day went down:

After the minutes from the previous year and the annual reports were approved, the first motion discussed was political expenditure in the Union. This resolution was passed, and will allow the Union to spend money on things like the Your Vote Your Voice general election campaign – check out this background paper for more information on what it means.

Updates were given on motions passed last year: change for debit card usage is to be under discussion soon; regarding new seats for the Union Films cinema, we are in negotiation with the University over costs; the bank of SUSU is currently under development; censorship in SUSU is under discussion – but with no complaints this year, it seems progress is being made; the formation of the EVAs underwent changes this year; improved trans-inclusion can be seen in the sanitary bins in male toilets, as well as the new rules on gender titles in the student record system; sabbatical presence on satellite campuses has gone ‘above and beyond’ this year; commitment to elections has been clearly displayed in the #YourVoteYourVoice campaign this year; the Sustainability Zone have been working hard on campaigns for better recycling of waste; the Jubilee Centre has seen the introduction of female-only swimming lessons; and finally, changes to the leadership and representation policy have been passed at Union Council.

Next up were this year’s motions – as follows…