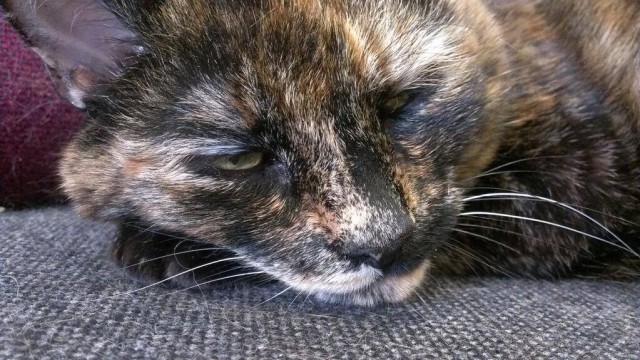 We are aware that incoming students will have had lots of information to take in about our amazing facilities, societies and everything else that goes on within the Union; but there is one important thing you might not have been told about.

Here at SUSU we’re home to some amazing students and staff from all over the globe; but we’re also home to our feline friend, the legendary SUSU.

SUSU the cat joined us at the Union in 2002, when she was much younger and skinnier. Porters took pity on her and fed her some scraps of food. Initially too timid to enter the building, her confidence grew and she’s been living in the Union ever since.

Over the years the faithful moggy has become a huge part of Union life, even featuring on University Challenge as Team Southampton University’s mascot!

You’ll often find her curled up in her bed on Level 3 of the Union, so make sure you go and give her a stroke and say hello if you see her!

We asked your Union President, Ben Franklin (yes that is his real name!), about everybody’s favourite cat, and he told us, “She’s an independent feline who doesn’t rely on anyone for anything (except food, water and the occasional belly rub) – she is the world’s most aloof cat and if she lets you pet her, you are truly among a blessed number. Bae of the year, every year since 2002.”

Hump day got anyone else feeling like SUSU the cat? We're already desperate to return to bed! #humpday #cat #hurryupweekend

Susu the cat preparing for all the freshers moving in today! Make sure you use #hello susu

Congratulations to all the students who graduated today, even SUSU the cat was getting into the spirit of things! 🐱🎓 #SotonGraduation #UoSgraduation