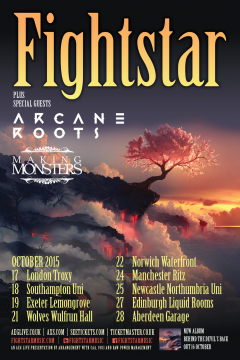 Arcane Roots are a three-piece alternative rock band from Kingston Upon Thames. Having previously supported Biffy Clyro on their European tour in 2013 and The Used earlier this year, the band are ready for a show-stopping performance at Southampton.

Derry based female fronted four piece ‘Making Monsters’ have spend the last two years relentlessly touring the UK and Ireland with bands such as Young Guns, Silverstein, We Came As Romans, Max Raptor and Skindred as well as their own headline tours. They have gained extensive airplay on BBC Radio One, Across the Line and with their single ‘Nosebleed’ featuring on Kerrang!. Making Monsters are set to release a new four track EP in 2015 via all major digital retailers.

Doors open at 7pm and tickets are £15 available from the Box Office.