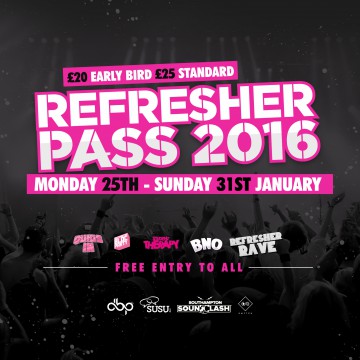 You’ve worked hard all year, focusing on deadlines, exams or hand-ins and the Christmas break is what you’ve been dreaming of. But when you return in the New Year, we want to take you back to Freshers’. Whether you’re a first year, a final year student or anything in between, we think it’s time you had a refresher….

We’re offering the ultimate post-exams blow out in the form of the Refreshers’ Pass, which will include the following events as part of Refreshers’ Week between Monday 25th – Sunday 31st January:

Tuesday 26th January – Bloc Party (included in the pass, or £6.50 for an individual ticket)

Thursday 28th January – Big Night Out (included in the pass, or £10 for an individual ticket)

You can get tickets for these events on the Box Office in one all-inclusive Refreshers’ Pass!

Check out the Refreshers’ Facebook event to find out more.

There are also other events going on during the week, so if the Refreshers’ Pass isn’t your thing, you can still get involved in:

We hope you get involved in the fun. You can find out more and get your tickets from our Box Office.