Refreshers’: An evening of Burlesque and Cabaret 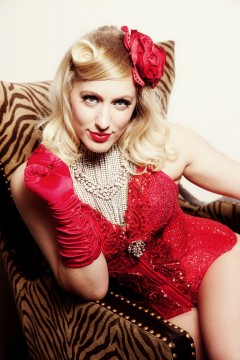 After the success of events in years gone by, it’s back again…the infamous Velvet Lounge will be taking over The Bridge for a night of Burlesque and Cabaret. For only £5 you can indulge in a night of vintage inspired entertainment hosted by ‘delightfully silly’ international cabaret compere Peggy De Lune, who’ll appear on alongside glittering showgirl Lena Mae, who will dazzle the audience with her classic burlesque routines.

Dating back to the 1830s and 40s in London, burlesque is a form of entertainment that’s often mislabeled. Initially it consisted of on musical theatre parodies that were used to mock the upper class. The cast performed pastiches of well known culture like opera and classic literature, taking satirical digs at popular culture.

The genre was so popular in England, it was staged in New York in the 1840s and was a hit. These American shows continued to be performed, and soon started to include elements of the popular minstrel shows, and when the genre fell out of fashion in England at the end of the 1800s it continued to flourish in America. As the popularity boomed, the shows started to develop to include risqué dance routines, as well as a mix of comedians and musicians also performing. Although the audience came for the entire show, it was the popularity of the dance routines that kept them coming back, and gradually these dances became the headline acts of the show. During the 1920s, burlesque as it’s known now started to emerge and come into its own.

For a sneak preview of what to expect, check out SUSUtv‘s video of the burlesque event during this year’s freshers week!