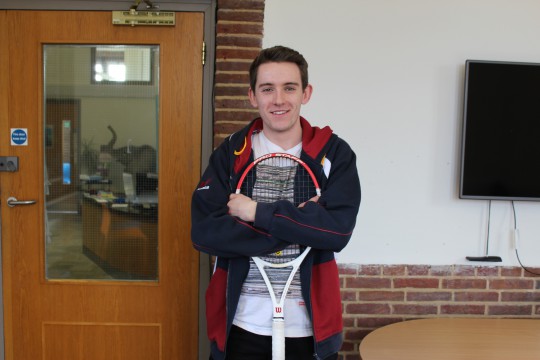 The next step down from that is the Intermediate Squad which trains on a Saturday afternoon and, through being a member of the club, you can use the facilities throughout the week as well.

The Performance Squad trains twice a week on Monday and Thursday nights, and plays matches as well on a Wednesday.

And then there’s Social Tennis which is open for anyone who wants to give tennis a go, so you get people who have never picked up a racquet before.

Where do the teams play?

We’ve got courts at Wide Lane which is where all of our training takes place as well as the Saturday and Sunday Squads. Then there are also two courts at the Avenue as well.

The teams play all of their home matches at Virgin Active at Hedge End, next to the Aegeas Bowl. Seeing as the season for BUCS matches runs from October through to March time – probably the worst months of the year to be playing outdoor sport – we can’t really rely on Wide Lane, so the agreement with Virgin Active is really handy. We also have an internal tournament which goes across all of the different levels and we have a big finals day where we rent out four or five of their courts, so it’s great for that. It’s not too far away either – plus they have some really snazzy indoor carpet courts!

Does it matter if you don’t have any previous experience of playing tennis?

Not at all, we encourage people to come down whether they’ve played tennis at a really high level or never played before. Always come down to Social Tennis because, if you’re not interested in anything else, it’s a good way to meet new people. One of our Committee members will have a hit with you to see what kind of level you’re at and, if you just want to play socially, that’s totally fine. If you want to try and push yourself to get into the team, there’s a system in place for that too.

How much does it cost to be a member of the Tennis Club?

Social membership, which gets you access to the facilities on Sundays and all of the tennis balls etc, is £40 for the year. The Saturday Squad membership gets you all the facilities in the club tournament as well and the coaching from our First Team captain and that’s £80 for the year. The Performance Squad is £100 for the year and covers travel to matches, entrance fees for BUCS, the ability to use Virgin Active for matches – pretty much everything! The only thing you need to buy is a kit – and a racquet comes in handy too!

Do you hold many socials?

We have a few different ones and we try and do at least one non-drinking social a year, like bowling or laser tag. Then every week we do a big night out social which might be to Jesters – if we’re fortunate! – or Oceana. It varies week on week.

They’re always every Wednesday, which works well after our matches – depending on the outcome, you can either go out to celebrate or drown your sorrows!

Do you go on any tours as a club?

We try to have one every year or every two years around Easter time. Last year we did a long weekend in Budapest – which didn’t involve any tennis!

What is the best part about being involved in the club?

It’s a really inclusive club so you can join whether or not you’ve played tennis before – and that’s only going to increase as we’re looking into more options on a social level.

Why would you encourage other students to join the club?

It’s a great club to join whether you just want to meet some new people, or whether you want to play tennis for the university. There are good opportunities for progression between the levels too, so you can easily move up which makes it a nice club to be a part of.

Tell us a fun fact about the club?

One of our First Team players won his 100th BUCS match representing the university this year. He’s a Medic so he’s been playing for us for five years. He won full colours at the AU Ball last year, which is for players at international level or to recognise outstanding achievements. He’s the first ever person from Tennis to get full colours.

Any important events or tournaments coming up?

Varsity on 13th March! Being at home this year, it would be great to get as many people to come and watch us play against Portsmouth. That extra bit of support at Wide Lane would be fantastic.

It’s easy to join up throughout the year and the Facebook group is the simplest way to keep up to date with everything. Other than that, get in touch through our Twitter account @teamsotontennis or via our email address.