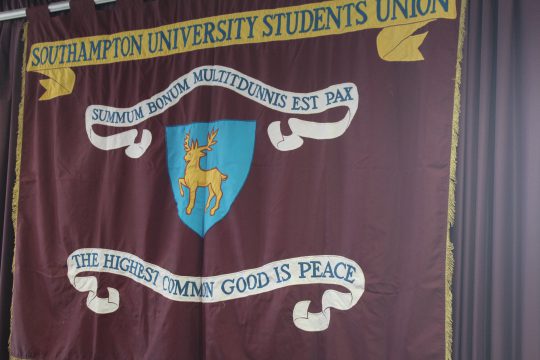 We held our Annual General Meeting (AGM) at The Bridge yesterday (11 May), where you got to openly discuss and vote on the ideas you submitted as part of ‘Change One Thing’.

How did it go?

The AGM was our most successful yet, with a record breaking number of ideas submitted by students (161) and the highest number of student submitted policies (19) than ever before!

Students were able to vote online at www.susu.org/change to make decisions during the AGM and the whole meeting was live streamed by our very own SUSUtv, which meant that you could have your say even if you weren’t there physically.

Student engagement was at an all-time high – we achieved the most online voters than ever before with 563, which is a 46.2% increase on last year!

Thank you to everyone who took part and we hope you enjoyed your free pizza in the break.

So what was decided?

Many different ideas and proposals were discussed, including the Unions’ use of plastics, gender balancing in Committees and even whether Susu the cat should become an honorary President.

But if you missed it, you can view the full agenda and decisions here at www.susu.org/change.