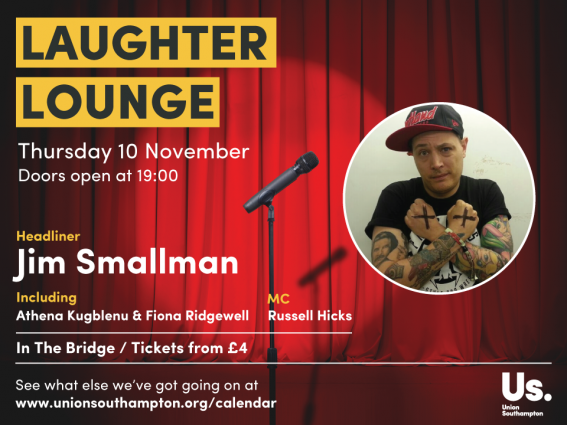 Stand up comedy competition winner of ‘The Blackout’ at Up The Creek (twice) and a finalist in ‘Jokers Joker’ in May 2015, Fiona Ridgewell will be have you in stitches.

Favourite on the University comedy circuit, U.S. comedian Russell Hicks, is due to join us as Thursday’s opener. Blessed with the “pessimism of Jack Dee mixed with the deadpan aggression of Denis Leary”, according to Broadwaybaby.com, Hicks puts on a “riproaring” night of laughter.

At the usual price of just £4 for a ticket, or £6, if you want some nachos while you watch.

Tickets can be bought at the usual price of just £4 for a ticket, or £6, if you want some nachos while you watch. Get yours at www.unionsouthampton.org/boxoffice

There will be a limited number available on the door – at that price, it would be rude not to!

Make sure you join our Facebook event for the latest news and updates.